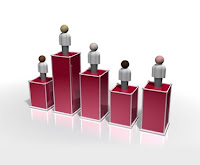 A census taker asks a lady at her front door how many people live in her house and what their ages are. The woman tells him that her three daughters live in the house, that the product of their ages is thirty-six, and that the sum of their ages is the number of the house next door. The census taker goes next door and looks at the number of the house. When he returns he tells the woman the information she gave him is not sufficient, whereupon the woman tells him, "My oldest daughter is sleeping upstairs." The census taker thanks her and promptly figures out the daughters' ages. What are the ages and how does he know?

The solution is: The woman has a nine year old daughter and two-year-old twins. Since the census taker knew both the product and the sum of their ages, confusion could arise only if two or more sets of ages led to the same product and sum. If you break 36 into three factors you find that only two sets of ages (9, 2, 2 and 6, 6, 1) lead to the same sum; 13. The woman's final piece of information tells the census taker there is only one oldest daughter, not two of the same age.
Posted by Scoop at 8/05/2011 10:00:00 PM

Scoop
I have been described as someone who has opinions that are very strong but educated and uniquely, my own. I'm usually the guy who says what everyone was thinking anyway and I have a sense of humor that is both sarcastic and dry. Some get it while others can't. I'm a rabid hater of disinformation, misinformation, and hypocrisy, and I'm so tired of waiting for the truth... I started this blog for me; but however you may have stumbled upon this rumpus, welcome, come on in and grab a Guinness... I invite you to rant with me so that we might learn about each other - but more importantly - about ourselves...